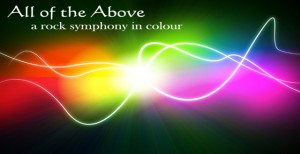 All of the Above at the Inn on the Green

The successful and intensely well received ‘All of the Above’ show on the 25th of October 2008 at the Inn on the Green, proved that audiences thrive on unique – positive and engaging musical experiences.

Hats off to the amazing group of people who performed this last Saturday night to a packed house, filled with those who had traveled from the US, Wales, Scotland, Canada and Europe, in order to experience the special magic that is ‘All of the Above’.

The show opened with a masterful performance by Lee Harris and River Styx – chilling the crowd out with their lovely combo of trance hip-hop and beat poetry. When Tony Lowe and Alison Fleming came on, the audience was in the perfect mood for an inspiring and uplifting show. And was it ever, driven by the power machine of Buj Stapley and Steve Gee on drums and bass and accompanied by the upbeat keyboards, percussion, and backing vocals of Poppy Gonzalez, the band had everyone enthralled from the moment they started. Tony Lowe’s blistering and heartfelt guitar electrified the room and when accompanied by Alison’s ethereal vocals the result – a mesmerized and thoroughly fired up crowd! Thanks again to those who traveled from afar, to the wonderful group at the Inn on the Green, to Lee and River, Gareth Redfarn (sound), and to all those special people who helped out. Also our great thanks to all those who donated to this charity fundraiser, all in all a huge success and all for a great cause!

“Thanks to you, Alison and the rest of the band for creating a night of magic and great music! It surely was worth the trip all the way from Denmark!”

“What a brilliant night, you’re a truly gifted songwriter. There wasn’t a track that did not stir me.”

“I felt so uplifted.”

All ticket proceeds were donated to Action Aid’s – Bollocks to Poverty Tour! Bollocks to Poverty is part of ActionAid, an international charity that works in the world’s poorest countries in Africa, Asia and Latin America. “ActionAid doesn’t just hand out aid; we give people the power and resources to end their own poverty for good by helping the world’s poorest people speak to the world’s most powerful and demand their right to food, education, and healthcare.”

A very special thanks to two special people, without whose support the event would not have been possible.