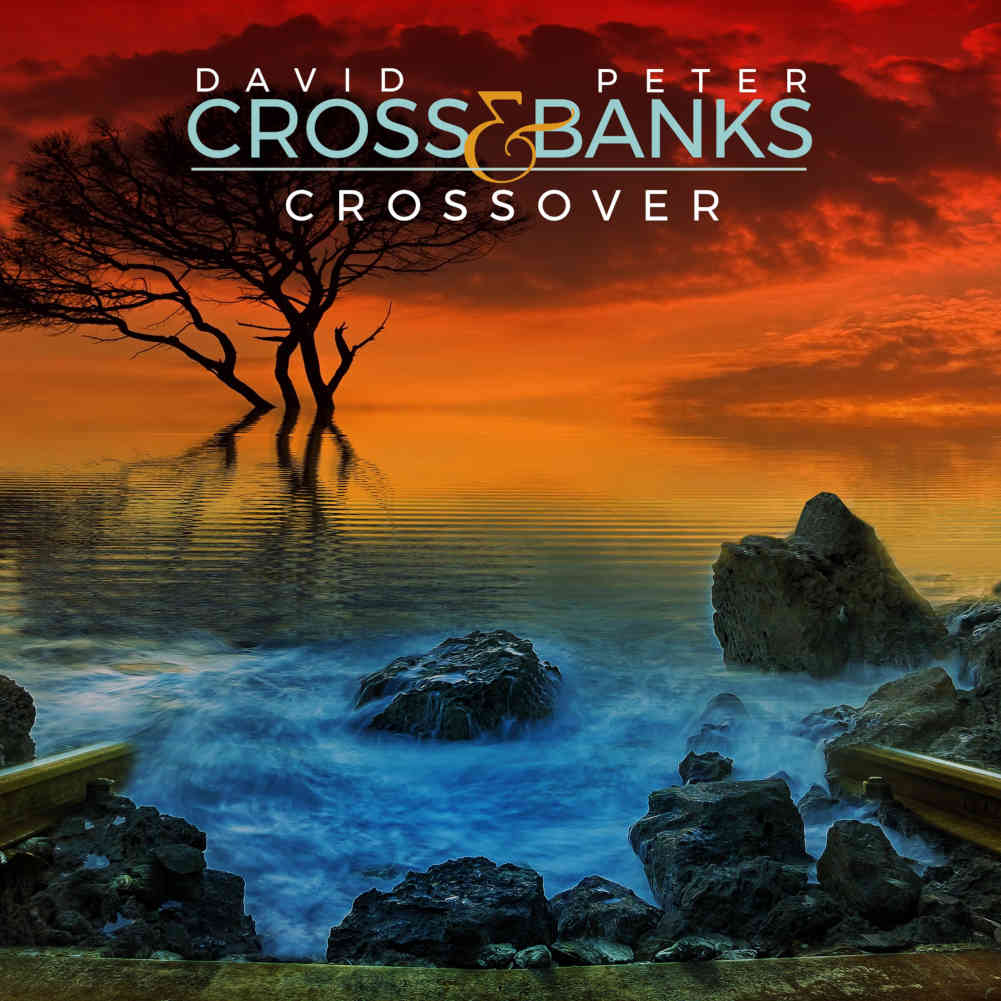 The mystery album Tony Lowe has been producing is now finally announced. From improvisations by David Cross and Peter Banks recorded in 2010, they created an album of original material. Including guest musicians from King Crimson and Yes, recorded over the last two years, the result is Crossover!
The guitar and violin parts for this NEW STUDIO ALBUM were recorded on the 10th August 2010 in an afternoon of improvisation.
The resultant album was produced by Tony Lowe and David Cross, and the guest appearances were recorded during 2018 and 2019:
Pat Mastelotto
Tony Kaye
Billy Sherwood
Randy Raine-Reusch
Andy Jackson
Oliver Wakeman
Jay Schellen
Jeremy Stacey
Geoff Downes
This is the last new album of material from the late Peter Banks, who passed away in 2013, and had wanted to see this material released.
TRACKLISTING
1. ROCK TO A HARD PLACE
2. UPSHIFT
3. THE SMILE FREQUENCY
4. THE WORK WITHIN
5. MISSING TIME
6. PLASMA DRIVE
7. LAUGHING STRANGE
8. CROSSOVER

Tony Lowe’s ESP Project began in 2015/16 with ‘Invisible Din’ featuring well-know prog guests. Followed in 2018 by ’22 Layers of Sunlight’, a collaboration between Tony Lowe & Peter Coyle. ESP albums have been given over 26, 4-4.5 star reviews by music press, voted into the top 10 Prog Rock albums of the year and top 10 albums of 2018. 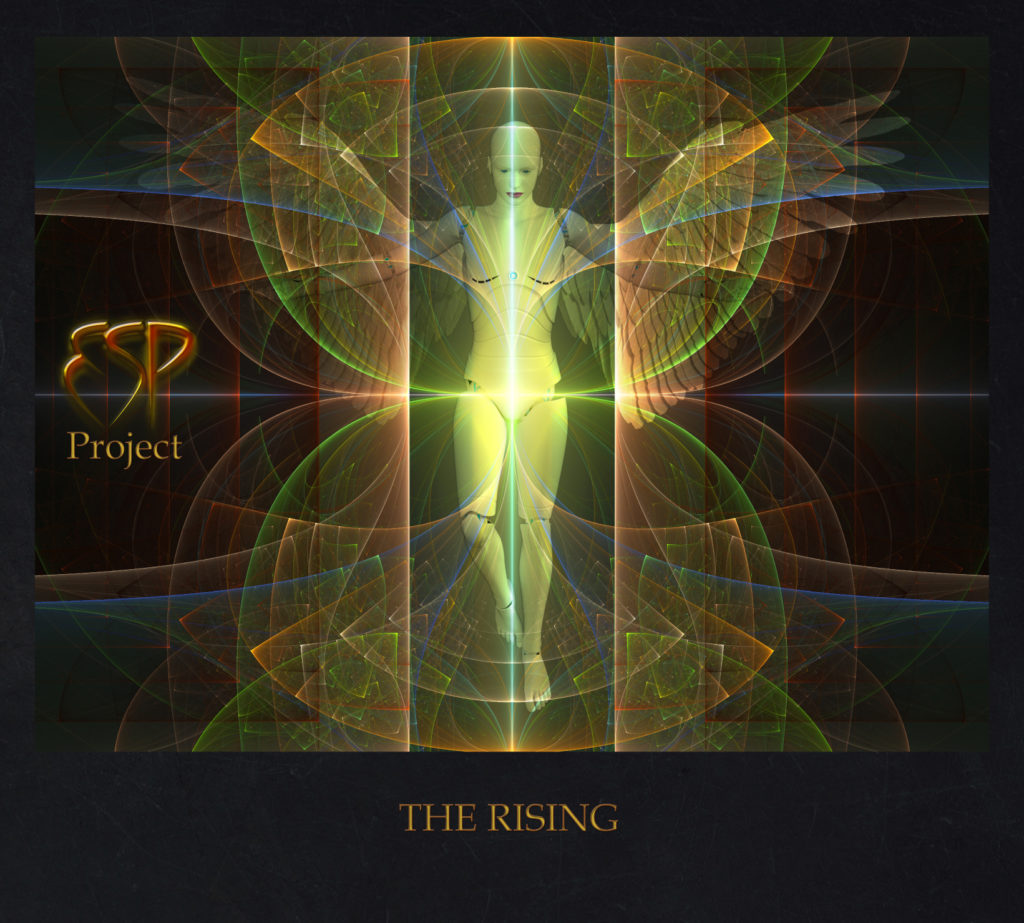 Back with a sharp rise in temperature, the new ESP Project album, THE RISING, is upbeat and powerful. This tight four piece band roars through a landscape sculpted by the powerful and moving music of Tony Lowe, coupled with insightful and heartfelt lyrics of Damien Child with his versatile and poignant vocals. With guitar and keys by Tony Lowe, the passionate grooves of Pete Clark’s bass, underpinned by the intense energy of Greg Pringle’s drums, this album takes the listener to another level in the ESP catalogue.

FIRST REVIEWS of THE RISING

The sheer scale and extent of the musical vision is mesmerising. This is an album brimming with invention and imagination, where exceptional instrumental artistry embraces a rich lyrical poetry to create tantalising musical sketches to surprise and delight in equal measure. Highly recommended.” Review – Rob Fisher – The Progressive Aspect

“The Rising will without question lift your spirits towards the sky, injecting both pace and energy at exactly the right juncture. It’s a real pleasure in this age…that the likes of ESP Project are still crafting well considered albums that flow and engage both through each individual song but also from the mood they create as a cohesive whole.” Review – Sea of Tranquility

“…the whole album sparkles with musical, lyrical and vocal delights. Lowe and Child seem to have both drawn each other’s talents and created the most rounded, enjoyable ESP album to date.” – Review – Jason Ritchie – Get Ready to Rock

“An album that promises to deliver on everything that the band has previously worked on and more.” Review – The Median Man

On Bandcamp – On iTunes 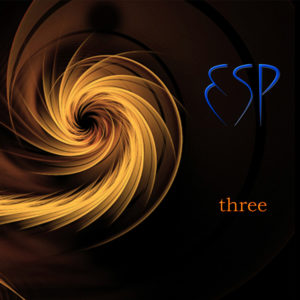 ‘three’ has all the hallmarks of the first two ESP releases, with 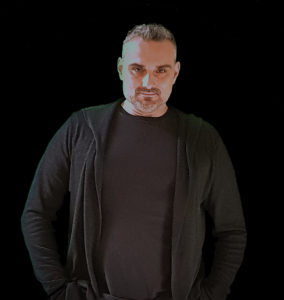 Tony’s symphonic compositions and arrangements weaving in and out of evocative and passionate vocal sections, delivered with both sensitivity and power in all the right places by Damien Child, an accomplished actor and singer with many years experience in TV, Radio and West End Theatre.

With Greg Pringle on Drums and Pete Clark on Bass this is a formidable combo of accomplished musicians playing with heart and soul. Threaded through by Tony’s unmistakeable guitar and keyboard playing, a must for anyone who liked the previous two albums, which together were given over twenty-six, 4 – 4.5 star reviews by the music press and voted into the top 10 Progressive Rock – albums of the year as well as in top 20 albums of 2018.

Tony and Damien will be working on a new album for an autumn 2019 release; in the meantime, as an introduction, ‘three’ is available on Bandcamp as a CD and digital download from 19th Jan, and the usual digital outlets. Press Release 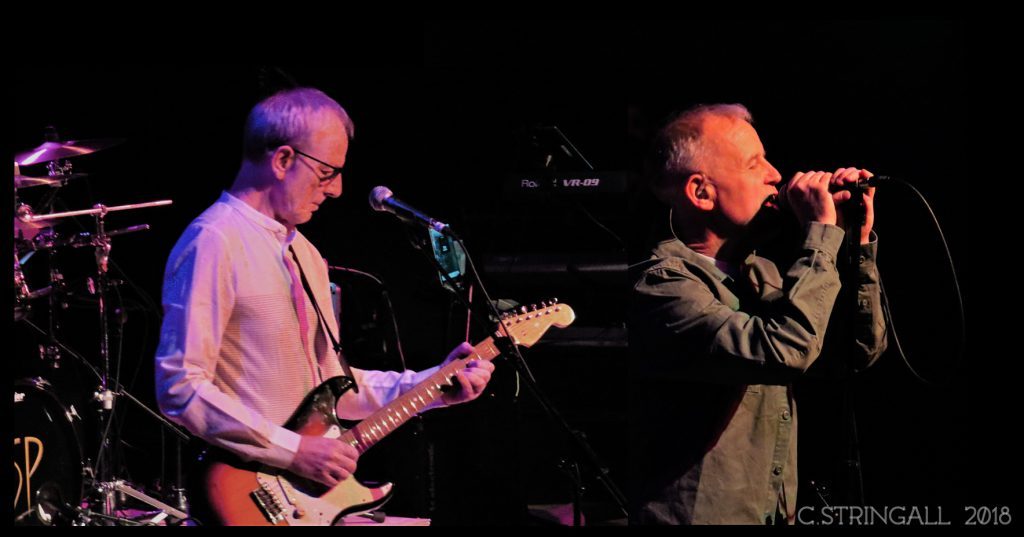 ESP 2.0 – The new collaboration between

‘22 LAYERS OF SUNLIGHT’ – written and performed by Tony Lowe and Peter Coyle (ex-Lotus Eaters) with Mark Brzezicki on drums, Pete Clark on bass. Coming after the successful debut of the first ESP album ‘Invisible Din’, the 2016 release which earned over 14 top reviews by the music industry; this incarnation features Peter Coyle, who was recently described as ‘one of the most under-rated singer/songwriters in the UK’. Joining forces with renowned composer/producer Tony Lowe to write thes 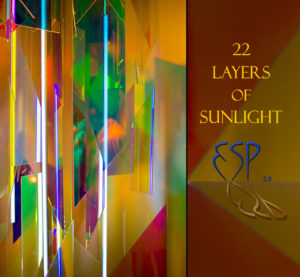 ESP 2.0 – 22 LAYERS OF SUNLIGHT – The unique combination of Peter Coyle (formed The Lotus Eaters in 1982 – best known for the international hit ‘The First Picture of You’), Tony Lowe (Composer/Producer/Guitarist) with Full Band will perform music from their new prog rock album, ’22 Layers of Sunlight’ (April – 2018) along with songs from ‘Invisible Din’ the 2016 release which earned over 14 top reviews by the music industry.

*The music can be compared to Genesis, King Crimson, Yes, and Peter Gabriel.

*dates, times & guests are subject to change
“…one of the best prog releases this year. Fantastic album!” Keep up with Reviews. 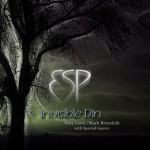 ORDER – The CD from Sunn Creative

ESP – ‘Invisible Din’ at Amazon US

The new band, formed by Producer/Guitarist Tony Lowe and Drummer Mark Brzezicki, showcased their Debut Album ,‘Invisible Din’ on 11th November 2016, including performances from most of the musical contributors. The immensely talented Mickey Simmonds joined the project on keyboards. Mickey has previously worked with Mike Oldfield, Fish, Camel and many others. Launch REVIEWS 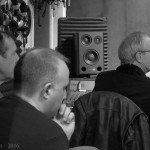 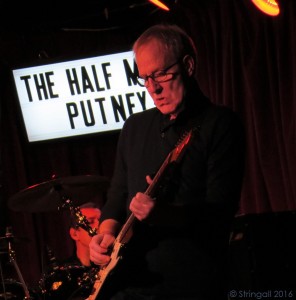 A great night was had by all at The Half Moon, Putney with Simon Townshend and Band in support of Independent Venue Week and the launch of Simon’s label, STIR Records – Tony is very much looking forwar 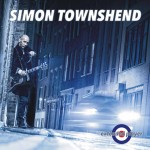 d to playing guitar with Simon Townshend on the 29th of January. With Mark Brzezicki and Phil Spalding it should be a right good noise and also the same line up as on the ‘Denial’ album. A Four track Limited Edition EP of brand new mixes will also be available on the night. Tickets and information. 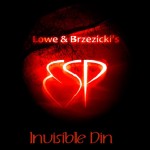 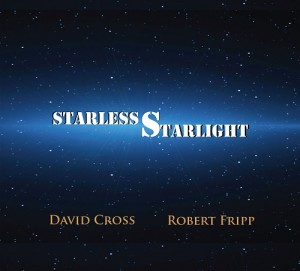 ‘Starless Starlight’ by David Cross and Robert Fripp, produced by Tony Lowe and David Cross, was released on May 4th 2015. “As a result, this extraordinary collaboration between Fripp and KC alumnus David Cross serves as a gorgeous salute to the most emotionally potent refrain in the band’s history.”

Read more in PROG (Issue 56 June 2015). David Cross interviewed in Classic Rock describing the creation of Starless Starlight; “Then I spent so long in developing these that they only really came into focus when Tony Lowe came into the project as a co-producer to help bring it all together. You can get so locked into music that you can’t see the wood for the trees. Thankfully, Tony saved me from myself. What I was aiming for was music that was warm yet dark. Something that drew you in, yet also had a certain distance. I think that’s what you hear.” Continued. “Nocturne and back again: CRIMSO classic makes a stellar return.” – Let It Rock “But whatever it’s all about, this is unquestionably one of the most beautiful violin albums I’ve ever come across, and one of the best albums so far this year.” Read more of this excellent review of ‘Starless Starlight’. Andrew Keeling reviews the album along with a musical analysis here; Sid Smith’s take on the album. ‘Starless Night‘ the album launch gig – Review Here – here is a shot of 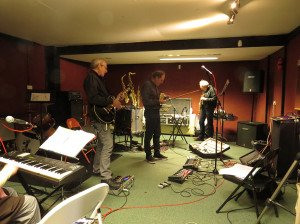 Find out more about ‘Starless Starlight’, Creativity,  and King Crimson in this Interview with David Cross. 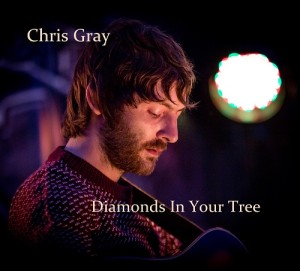 Tony Lowe accompanied Chris Gray in his Live Session on the Robert Elms Show on April 1st on BBC Radio London 94.9. Playlist. Tony completed producton of Chris Gray’s debut album ‘Diamonds In Your Tree’ for a 6th April, 2015 release. The album, EP and singles are receiving radio play all over the UK, including on BBC Radio 2 – Dermot O’Leary show. 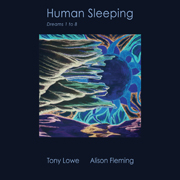 or Tony Lowe. Alison Fleming’s voice is the perfect match for this dreamy music. Loads of positive energy flowing with every electric guitar chord laid down. Get this and experience an incredibly warm dream state.” Mark Johnson “The prog-de-resistance here is the 11 minute ‘The Dream Corridor’ …If Steve Hogarth was female and Marillion went a bit new age, it may well sound like this.“  David Randall – Review at Get Ready to Rock “Tony Lowe/Alison Fleming’s Human Sleeping Dreams 1 To 8, on Sunn Creative, 1 July. Think Pink Floyd go trance.” Record Collector “This album reminded me of the 90?s musical wave of bands like Enigma, Deep Forest and the Orb. Opener ‘Mystery’ really reminds you of these bands, as Alison’s vocals soar over the keyboards and programming. ‘Something’s Going On’ with the repetitive and rhythmic use of the vocals is another soothing song, but don’t go thinking this is nice background music as the guitars of Tony Lowe recall Mike Oldfield. A really enjoyable listen and one to keep coming back to.“  Jason Ritchie – Get Ready to Rock Catch reviews and updates for ‘Human Sleeping – Dreams 1 to 8‘ at sunn creative. 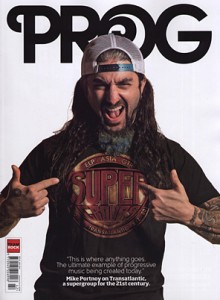 2014 looks to be another busy year at the Sunn Creative label; three new albums to be released, plus some re-releases of Tony’s earlier works. On 27th January, Bram Stoker’s ‘Cold Reading’ will be released. Produced by Tony, this album has had some amazing reviews so far and looks like it will sell well around the world with many copies being pre-ordered from UK, Germany, Poland, Brazil, North America, Italy, Russia and Japan. February 2014, Tony starts pre-production on an album for sunn creative’s latest signing, Chris Gray, due for release autumn 2014. As Tony says…“ Chris has so many good songs that it was hard to whittle them down but we have 11 absolute gems for the album.” In July 2014, ‘Human Sleeping’, the long awaited new album from Tony Lowe & Alison Fleming will be released. The first since ‘Second Nature’ in 2006. This album is simply delicious and contains eight new songs, including the mysterious 11 minute long ‘Dream Corridor.’ 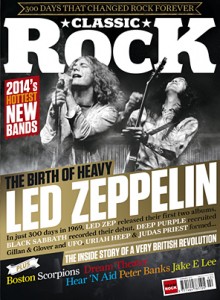 Also this year, Tony is re-working the critically acclaimed ‘All of the Above’ – ‘A rock symphony in colour’ with Alison Fleming. Re mastered and re-packaged. April 2014 also sees the release of Simon Townshend’s new album, Denial, with Tony playing guitar alongside, Simon, Mark Brzezicki and Phil Spalding. And finally, the David Cross (King Crimson) album ‘Starless Starlight’ is coming out on Noisy Records. This is grown from the musical theme featured on ‘Starless’ by King Crimson crafted into eight atmospheric instrumental pieces with some incredibly beautiful violin playing from David. Co-produced by Tony, this album is already gaining a lot of interest around the industry.

Autumn 2013 Update – Tony recently produced a four song EP for singer-songwriter Chris Gray to be released 26th October. Chris is fast gaining a strong following on the gig circuit and we feel he has a very bright future in the industry. Order and Press information at Sunn Creative. Tony 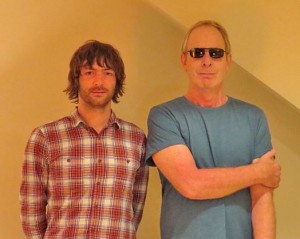 has been in the studio working on ‘Human Sleeping’, the new album with Alison Fleming. This will be their first release together since 2008 and promises to be radically different from anything they’ve done before. Release is set for early 2014. Last month saw the promo video release (see below) for the Bram Stoker a 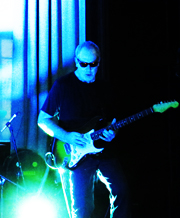 lbum ‘Cold Reading’ which Tony produced and played on. There has been quite a buzz going round about this album. Complete tracks are being played currently on various radio and internet radio shows and the CD is available from January 27th, 2014. Pre-orders are being taken now on the Bram Stoker website. Press information available there as well. Tony played two more live shows this year with Simon Townshend. The Who convention at Bush Hall on September 8th and the Looe festival in Cornwall on the 28thSeptember. All in all another incredibly busy year, watch this space and the Facebook pages for updates. News from early 2013 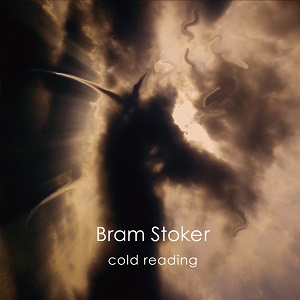 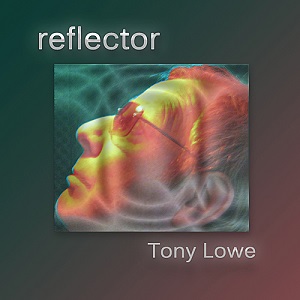